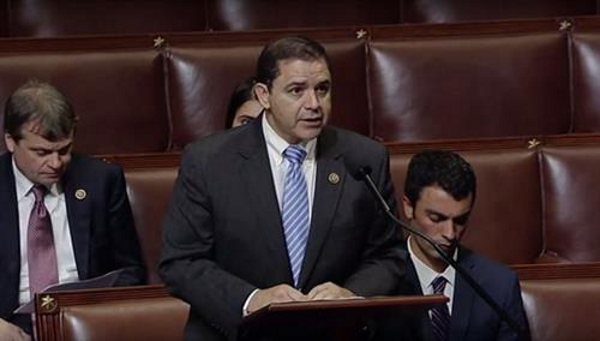 “…authored to name the post office located at 810 North U.S. Highway 83 in Zapata, Texas, as the ‘Zapata Veterans Post Office.'”

Speaking today on the House Floor, Congressman Cuellar stressed the importance of naming this post office in honor of all veterans. Zapata is home to 503 veterans, according to the U.S. Census Bureau.


â€œAcross my district, there are many examples of fine men and women who have honorably served our country,â€ Congressman Cuellar said. â€œAn example would be the six TreviÃ±o brothers of Zapata; World War II veterans who served their country bravely and honorably. The TreviÃ±o brothers, just like veterans all across our nation, share a wonderful love for country. We owe our freedoms to them, which is why I am recognizing them with the dedication of this post office.â€

Teodoro, Leopoldo, Antonio, Anselmo, Filberto Jr., and Jose Manuel TreviÃ±o performed many acts of bravery, including taking down enemy plans and protecting soldier by using their own bodies as shields. Their courage and dedication to our nation demonstrate what it really means to be an American.

Congressman Cuellar also thanked local veteran caregivers for their service to those returning home from duty.

â€œI also thank the Veterans Services Office in Zapata County, one of many organizations that work tirelessly to provide the essential care to those who have returned home from service,â€ Cuellar added.

Congressman Cuellar speaks on the House Floor on Tuesday, September 20 in support of H.R. 5591, a bill he authored to name the Zapata post office as the â€œZapata Veterans Post Office.â€

The bill passed the House and is now awaiting approval from the U.S. Senate. more…