More calves get sick during the fall than any other season, which can lead to costly consequences. Average daily gain, feed efficiency and overall performance of calves will decline, but education and awareness are key to help minimize these financial losses.


â€œCattle that get sick and are treated never perform as well as their herdmates that never get sick,â€ said Dr. Ron Gill, Texas A&M professor and Extension livestock specialist.

There are many factors that impact the health of cattle. As cattle are moved through the system to be sold at auction, their stress levels increase during the transportation process. 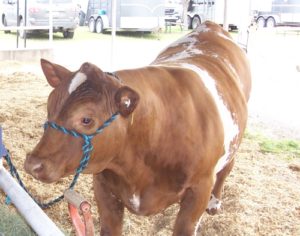 â€œAbout 80 percent of the calves born in the U.S. are marketed in the fall,â€ Gill said. â€œThat puts strain on the auction and transportation sectors to get them all relocated in a timely fashion. Length of marketing and transportation adds stress and depletes nutritional reserves due to decreased feed and water intake while going through those processes.â€

Major fluctuations in weather, like temperature and humidity, can also add more stress to a compromised immune system in cattle, according to Gill.

Bovine respiratory disease (BRD), also known as shipping fever, is one of the most commonly stress-induced diseases found in cattle. It occurs most often within two weeks after calves are weaned.

â€œBRD is a combination of a viral infection that weakens the immune system, allowing bacterial pathogens to take over and create a debilitating respiratory tract infection, usually attacking the lungs,â€ Gill said.

The potential exposure to pathogens increases as cattle are commingled with others and transition to new surrounding and feed resources. This can impact stress levels making them more vulnerable to shipping fever.

The onset of BRD should be expected during the weaning process, so Gill urges livestock owners to closely monitor calves.

Early symptoms of BRD include loss of appetite and energy and fever as the body tries to render the virus inactive.
There are no treatments for viral infections, but vaccines can help boost natural immunity.

Recognizing symptoms and treating them early are key to a successful outcome and overall performance. Cattle owners should consult their veterinarians to determine the best course of action to take.

And proper weaning can offer several benefits for ranchers.

â€œWeaning calves in a low-stress environment at home is by far the best way to help them stay healthy and perform up to their genetic potential,â€ Gill said.

Practicing proper loading and unloading techniques during transportation is another method to reduce cattle stress.

â€œHuman interaction can be extremely stressful to cattle, particularly if the cattle cannot readily understand what they are being asked to do,â€ Gill said. â€œStockmanship is key in reducing stress during the loading process.â€

Stockmanship also plays a role in the final beef product and, ultimately, a rancherâ€™s bottom line. Because cattle bruising during transportation is a growing concern as finished cattle are getting bigger and taller.

A Kansas State University study showed 50 percent of all cattle that arrived at packing houses are bruised during transportation.

Results of the study showed that bruising along the dorsal midline indicated bruising occurs as cattle hit the gate on the trailers during loading and unloading, which led to an industrywide loss of $35 million due to carcass trim of bruised muscle.

Those in the meat packing industry, truckers and feedyard managers argue that the solution to this issue is to modify the equipment used to haul cattle. But experts say that heavier end weights in cattle donâ€™t offer advantages for the cow-calf sector.

Gill said he hopes the cow-calf sector will begin to moderate mature frame size rather than promoting the increased size and modifying trailers.