This afternoon, Congressman Henry Cuellar (D-TX-28) announced the allocation of $560,000 in federal funding to fight the Zika virus on the border.

“I fought for these federal funds, along with the City of Laredo, so our community can invest in proven prevention methods,” said Rep. Henry Cuellar. “Zika virus infections have been reported here in our border communities, so vigilance is more important than ever. Now, our local officials have the resources they need to protect Laredo and Zapata families. I thank the Centers for Disease Control and Prevention and Dr. John Hellerstedt, Commissioner of the Texas Department of State Health Services, for their help in securing these funds.”

“When Federal, state and local authorities work together, we get results.  This announcement today is evidence that Congressman Henry Cuellar is working hard for Laredo to get federal reinvestment dollars channeled into our city,” said Mayor Saenz.  “And when Laredo goes to make its story known in Austin and Washington, D.C., there are people that hear us and take us into account. Recently, during our advocacy trip to Austin in January, we met with Commissioner John Hellerstedt of the Department of State Health Services about releasing these federal funds administered by the State; these monies will go a long way in assisting our Health Department to test for and prevent the spread of Zika.” 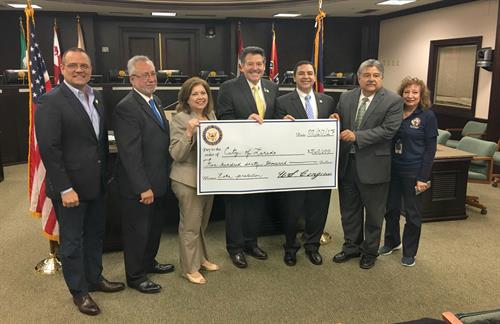 “These funds will assist with local testing for Zika virus and other infectious diseases, mosquito control, disease surveillance and education,” said Dr. Hector F. Gonzalez, MD, MPH, Director of Health, City of Laredo Health Department. “It will also allow us to spend more time in prevention assuring that women access health care early to prevent infection during pregnancy and to prevent birth defects.”

Congress provided 394 million to the CDC as part of the Zika supplemental funding bill. These funds were part of a $25 million federal allocation for Zika preparedness to the Texas Department of State Health Services (DSHS), about $10 million of which is flagged for local jurisdictions including 16 health departments. Those jurisdictions, including Laredo and Zapata County, were selected for their higher risk of Zika cases: mainly border, gulf coast, and urban areas. The City of Laredo will also conduct mosquito control operations in Zapata County with these funds.

Rep. Cuellar has worked to protect the people of his district from Zika since the epidemic began.

In April 2016, he hosted an international meeting at Texas A&M International University (TAMIU) to discuss Zika prevention in Texas, bringing together experts from American and Mexican academia, the Centers for Disease Control (CDC), the Department of Homeland Security, medical centers, and Texas state government.

In July 2016, in response to a request from Rep. Cuellar, the CDC established an office in Laredo and contracted a team of public health professionals to work on the border from Laredo to Brownsville, focusing on increasing surveillance, prevention, preparation and education to combat the Zika virus.