â€œFortunately, during the last two years we have seen their numbers recover somewhat, but they are still less than 50 percent of what they were before,â€


Recent efforts to help preserve the dwindling Monarch butterfly population are being seen in the Concho Valley. Thousands of the butterflies are swarming trees in the region during their annual 2,000-mile fall migration from Canada to Mexico. 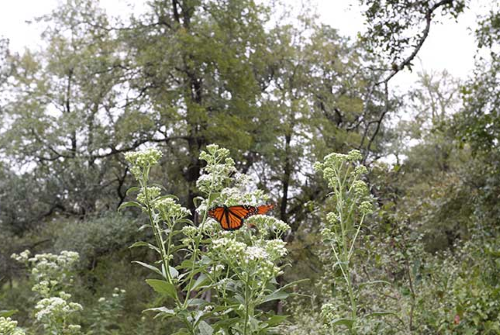 The Monarch has two special features that make them unique in the animal kingdom, according to Dr. Charles Allen, Texas A&M AgriLife Extension Service entomologist.

â€œSo they quickly figure out that this brightly colored insect thatâ€™s floating peacefully through the air is not food, and they donâ€™t eat them,â€ Allen told AgriLife Today.

This also causes any type of predator to avoid eating anything â€œthat even looks like a Monarch,â€ Allen said. This has also caused a number of insects to evolve to look like a Monarch to avoid becoming prey and to remain protected.

The Monarch also has a very unique migration patternâ€”a 2,000-mile journey from Canada to Mexico. This route roughly parallels I-35 through Central Texas, according to Allen.

The development cycle of a Monarch is also unique. They lay eggs on milkweed. The adults die, and the eggs hatch. The larvae feed on the milkweed and become butterflies.

As they migrate from Mexico each spring, this cycle occurs three more times as they head through the U.S. to Canada.

The Monarch also has a very strong sense of direction. They are able to locate their way back to Mexico with precise accuracy every time.

Experiments have put this accuracy to the test. The butterfly has still ended up in Mexico on the roughly 10-acre plot, despite experiments that have taken tagged butterflies 1,000 miles off course.

â€œNo other insect or animal does that,â€ Allen said. â€œFour generations out and they still know their way back to their historic overwintering grounds, a place this generation has never seen before. Itâ€™s an amazing story.â€

When the Monarchs arrive at the small plot in Mexico, they cover the very-large trunks of old forest trees at their overwintering site, Allen said.

â€œThose large trunks or boles are heat sinks,â€ Allen said. â€œAnd when the occasional cold snap moves through the area, heat radiating from those large trunks enable the butterflies to survive.â€

Illegal logging activities in Mexico have contributed to the decline of the Monarch. Satellite imagery or photos taken from planes determine the number of Monarchs in Mexico, by their distinctive bright orange colors.

Their numbers have dropped, but are beginning to see a slight rebound.

â€œFortunately, during the last two years we have seen their numbers recover somewhat, but they are still less than 50 percent of what they were before,â€ Allen said.

He said efforts to preserve the population seem to be proving successful by the large migration numbers.

â€œTheyâ€™re migrating in huge numbers, and Iâ€™m going to be really surprised if the acreage in Mexico thatâ€™s colored orange does not show an increase now and hopefully for years to come for the regal and very special Monarch butterfly,â€ Allen said.