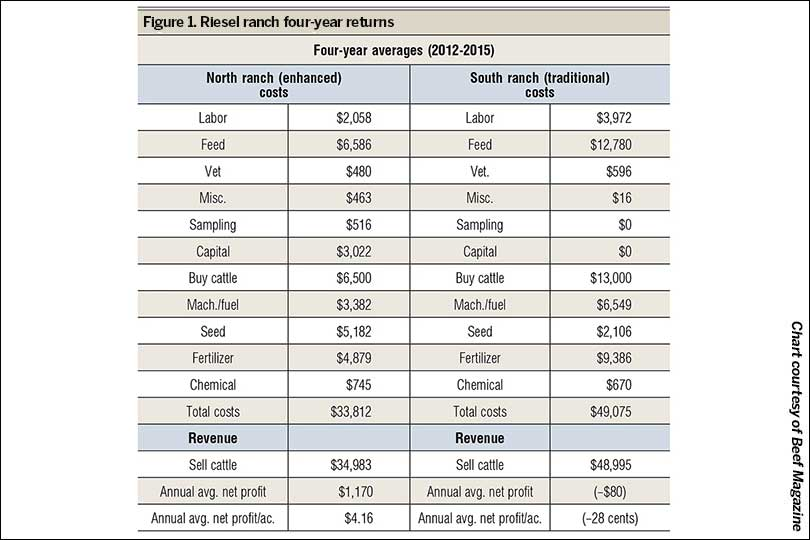 Better grazing management can help cut winter feeding costs and could increase profits for ranchers, according to research from the U.S Department of Agricultureâ€™s (USDA) Agricultural Research Service.

Research conducted in Texas evaluated soil health, forage and cattle production and profitability on a ranch belonging to ARS near Riesel, just outside of Waco.

The 10-year study began in 2011, and scientists and range management specialists studied conventional, set-stock grazing management versus controlled, planned grazing together with multi-species cover-cropping, according to Beef Magazine.

The 560-acre ranch was split in half. The research team worked with existing ranch managers on the north acreage to begin changing management and measuring the outcomes of soil health, forage production, cattle production and profitability. Everything remained the same as it had for years on the south 280 acres and was measured for the same factors.

The average return for the north unit, where managed grazing was being practiced, was $1,170 per year. The south acreage lost $80 per year with all the gates open and traditional hay feeding throughout the winter.

Jeff Goodwin, a former Natural Resources Conservation Service Texas state rangeland management specialist who now is a pasture and rangelands consultant with the Nobel Foundation in Ardmore, Okla., explained profits will improve as the north unit soil improves, which will allow them to increase stocking rates.

â€œWe should really begin to see some improvements in carrying capacity this year, since it takes about three years for cover-cropping and grazing management to really start making a noticeable difference in soil health,â€ Goodwin said. Read more…