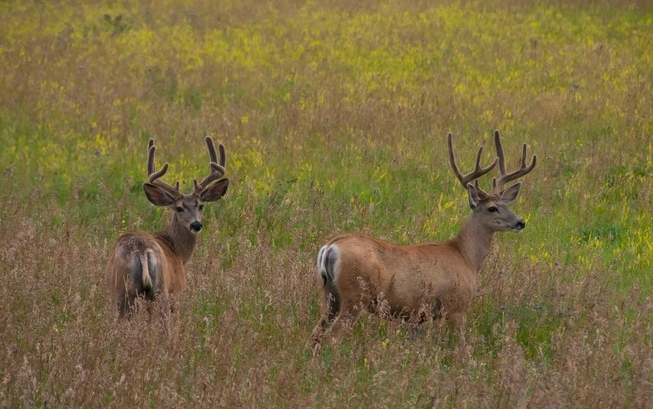 â€œItâ€™s has been quite a while since I remember a time when weâ€™ve experienced great back-to-back years of good rains across most if not all of the state,â€


The Texas deer hunting season opens Saturday, Oct. 1, for bowhunting and Nov. 5 for the general gun season. A special youth-only weekend season is set for Oct. 29-30. The general season runs through Jan. 1, 2017 in North Texas and Jan. 15, 2017 in South Texas. A late youth-only season is also slated for Jan. 2-15, 2017. For additional late season deer hunting opportunities and county specific regulations, consult the 2016-17 Outdoor Annual of hunting and fishing regulations.

â€œItâ€™s has been quite a while since I remember a time when weâ€™ve experienced great back-to-back years of good rains across most if not all of the state,â€ offered Alan Cain, TPWD whitetail deer program leader. â€œBecause Texas is such a large state we donâ€™t always see good habitat conditions that stretch from Amarillo to Brownsville or El Paso to Houston, but 2016 has been an unusual year in that the vast majority of the state has received good rains and surprisingly, temperatures have remained relatively mild.â€

Ideal weather conditions this year have helped produce a smorgasbord of lush green forbs and woody browse plants which comprise the majority of a deerâ€™s diet, Cain went on to add. â€œThese favorable range conditions will put deer in top body condition this year and antler quality should be above average.â€

Although good for the deer, ideal habitat conditions could make hunting tough at the onset of the archery season. Cain said most deer are still in a summer pattern, which means minimal movement, especially in South Texas where the rut is still a couple of months away. Bowhunters might consider focusing their efforts along heavily traveled game trails or near acorn producing trees.

Unfortunately, in some parts of East Texas, too much rain this year may wash out much of the early archery season as traditional prime river bottom hotspots may be tough to access. Those bottomland hardwood habitats along portions of major river drainages (Brazos, Trinity, Sabine, Colorado and Neches) that are still recovering from floodwaters will likely lack near-term browse and forb production, but acorn production can still make these productive places to hunt if hunters can access them.

Texas boasts a whitetail deer population in excess of 4 million and those numbers are expected to climb across much of the state due to high fawn production and survival this year. Parts of East Texas that have experienced extended flooding conditions may be the exception. Hunters play a key role in habitat management by helping to maintain deer numbers within the amount of food supplies the land can sustain. Wildlife biologists have conducted extensive deer habitat research over time and recommend deer harvest based on their findings. More…