A trifecta of conditions has led to a â€œperfect storm of quailâ€ for hunters in Texas this year. Hunting season starts Saturday across the Lone Star State.

According to the Texas Parks and Wildlife Department, quail numbers are good in most regions thanks to excellent range conditions, insect crop and nesting cover.

In the Rolling Plains, the quail population remained high after last season, which led to carryover into the breeding season. Conditions throughout the spring and summer further helped the increase. 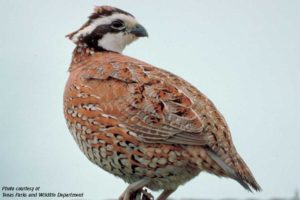 Hunting prospects for Bobwhite quail in the area â€œlook exceptional,â€ according to TPWDâ€™s Quail Forecast.

Last season in the Trans-Pecos region, there was a significant boom in Scaled quail, thanks to favorable weather. The quail boom last year carried over into the breeding season and led to high numbers again this year.

A good season last year also helped this yearâ€™s crop of quail in South Texas. Field observations there, however, were mixed, according to the report.
Some areas are too dry and quail did not fare quite as well there, while other areas will likely see a good quail year.

Bobwhite quail numbers fell below average in the Gulf Prairies due to too much rain. Areas that drained well are likely to have better quail numbers, according to the reports.

According to the report, itâ€™s been more than 10 years since quail levels this high have been recorded.

Texas hunters who plan to take advantage of the open season will need to carry a proof of hunter education, a valid hunting license and an Upland Game Bird Endorsement.

Hunter education is required for all hunters born after Sept. 2, 1971.

The daily bag for Bobwhite, Scaled (blue) and Gambelâ€™s quail is 15. Possession limit is 45.

Legal hunting is allowed from 30 minutes before sunrise to 30 minutes after sunset.